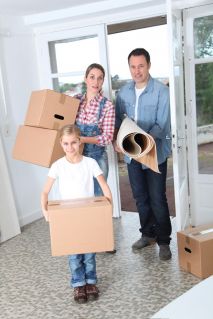 Moving house an adult can be stressful enough with so much to think about and seemingly endless, mundane tasks to be getting on with. The only thing that can make the moving process even more stressful than it already is, is moving with kids. This is because depending on age, many children won’t really understand what’s going on, how much pressure you’re under and why it’s such a stressful time! However, it can be much more manageable than you’d think as long as there’s plenty of planning and consideration gone into it. Make a Plan and Keep Them InformedGet planning early so that when it actually comes down to it, it doesn’t feel quite so overwhelming because you’ll know at least to some extent that you have everything under control.  The earlier that you can get started the better because then your children can be informed well in advance of everything  that happens, what they can expect and the kinds of changes that will be happening in the house. You should include in your plan - hiring the right removals company, packing, storage solutions and arrangements for actual moving day. Keeping on top of these things will save you plenty of headaches in the long run. Packing: Little HelpersPacking when you’ve got children can go one of two ways. They will either be completely terrible and hinder the process by getting in your way because they’re bored or overly excited about what’s going on or they will be completely brilliant and want to help you as much as possible. If it’s the former then it’s worth thinking about getting a friend, relative or childcare service to take care of your children on designated packing days so that they are out of the way and occupied. If it’s the latter then get them involved! Packing essentials include cardboard boxes, packing peanuts and bubble wrap all of which children love playing with and getting them involved in wrapping things up will keep them occupied and feeling like they’re involved! Travelling and DistractionsOn actual moving day keeping yourself sane while overseeing both the moving process and your children can feel like a particularly hard task. However, it can be done and one of the best ways to do this is have plenty of distractions for your children such as games or even better a friend or relative over to help out and watch them for you. This is also vital for your children’s safety because of plenty of heavy loading and large vehicles on moving day. Arriving At Your New HouseOnce you’ve arrived at your new house, the first thing you’ll probably want to do is start getting things in order, getting your furniture and boxes into the correct rooms and getting the actual moving process over and done with. If they’re at all interested and it’s at all possible one of the best things you can do is get the children involved with the unloading and unpacking so that they have something to keep them occupied that is actually useful. They’re most likely to be interested in their new bedroom or their new garden to play in so these are good areas to start off with, they can be your little helpers!Moving with kids can be a great experience because they keep a rather stressful day light-hearted and their excitement about the day can be contagious. Keeping them occupied is the most key objective and with that covered the rest can be plain sailing!